Divorce Parties on the Rise 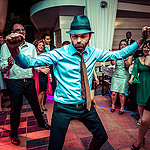 wedding day. It has been less common for people to spend money on, or even celebrate, their divorce. However, that trend is changing as divorce parties across the nation are on the rise. In some cases, people are even spending as much, or more, on their divorce party as the did on their wedding. We have heard all kids of interesting stories from clients on how the celebrated their divorce. Some have paid for their friends to go with them on a big trip over seas. Others have rented out clubs or restaurants and spent big bucks on food. The craze seems to be catching on. Even those with limited means are more often throwing some kinds of party, at their home, or doing something to celebrate the end of their marriage. What does this say about our society if anything that divorce parties are becoming more common place? I am not sure, and I haven’t yet formed an opinion on it. All I can say is that my client who choose to throw a divorce party are usually the ones who were very happy their marriage was over. Obviously those people who never wanted a divorce in the first place are probably not celebrating their pain and throwing a party.

Divorce Parties Even in Iran

Chris Salcido is a founding attorney of Divorce Lawyer Provo.
View all posts by Chris Salcido →
This entry was posted in Utah Divorce and tagged divorce, divorce parties, marriage. Bookmark the permalink.